This is an introduction to autoimmune disorders, also known as “autoimmunity.”

You may already be familiar, but most people are unaware of the range of autoimmune diseases and what they have in common, despite their seeming differences. Different specialists may treat them separately, but they all have inflammation at their core, and some common drivers. Then, we look at the multi-factorial component of autoimmunity, and what that means for you. Experts featured include Dr. Mark Hyman, the U.S. National Institutes of Health, Dr. Jockers, Dr. Tom O’Bryan, and the Australasian Society of Clinical Immunology and Allergy (ASCIA).

The U.S. medical research agency, The National Institutes of Health, sums up autoimmunity:

“When an intruder invades your body—like a cold, virus, or bacteria on a thorn that pricks your skin—your immune system protects you. It tries to identify, kill and eliminate the invaders that might hurt you. But sometimes, problems with your immune system cause it to mistake your body’s own healthy cells as invaders and then repeatedly attacks them. This is called an autoimmune disease. “Autoimmune” means immunity against the self.” (1, NIH). 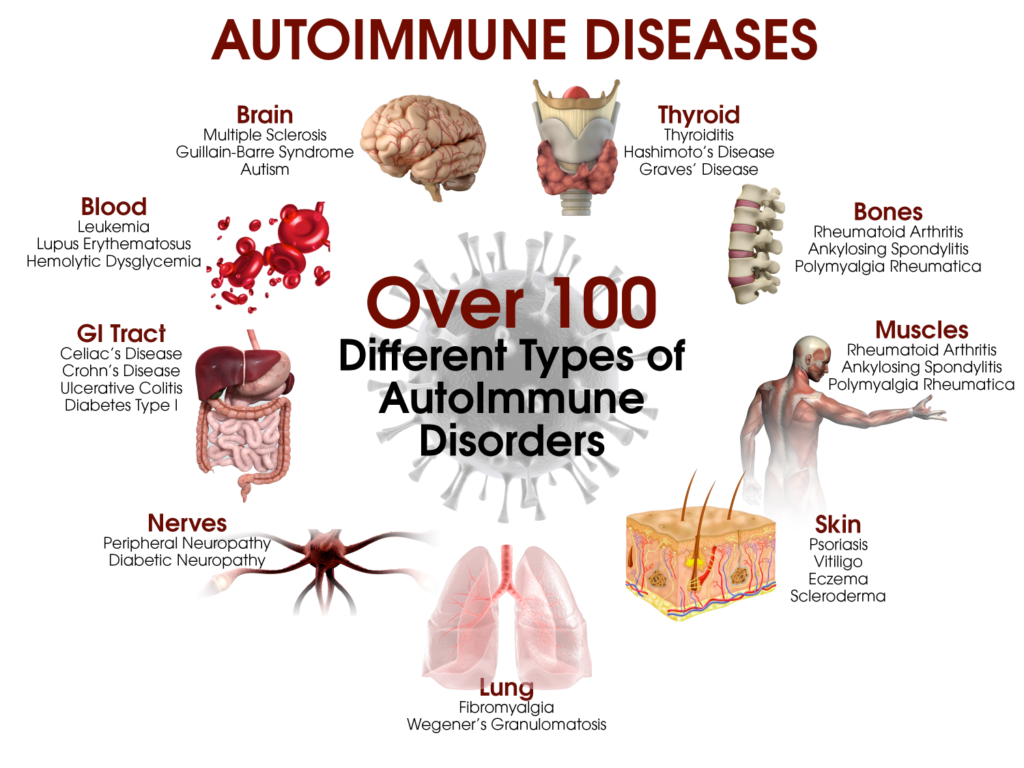 Dr. Mark Hyman, world renowned functional medicine practitioner, describes autoimmune diseases as “the most common chronic disease…a huge problem in this country [the United States].” He notes that as of 2015:

“As a whole, autoimmune diseases affect over 80 million Americans and five percent of the population in Western countries,” in fact, Hyman says, “More people have autoimmune disease than cancer, heart disease, and diabetes combined,” (2, Hyman).

While the American Autoimmune Related Diseases Association, Inc. states that “50 million Americans suffer from autoimmune disease,” (3, AARDA) – where they state that the numbers depend upon which diseased are included in their count – no experts disagree that the numbers are high, and on the rise. And the issue is not just confined to Western countries. In Australia, for example:

So, what are autoimmune diseases? According to Hyman:

“…Autoimmune disease isn’t just one condition. You’re probably familiar with the most common autoimmune diseases, like rheumatoid arthritis, lupus, multiple sclerosis, inflammatory bowel disease, type-1 diabetes, hypothyroidism, and psoriasis. But there are many more autoimmune diseases that affect the nervous system, joints and muscles, skin, endocrine gland, and heart. Simply put, autoimmune diseases are conditions where the body’s immune system attacks its own tissues rather than a foreign molecule like bacteria. This happens when something confuses the immune system.” (5, Hyman)

The U.S. National Institutes of Health identifies 27 diseases that fall into the autoimmune category includes (1, NIH). The American Autoimmune Related Diseases Association, Inc. (AARDA), however, says that whereas “the NIH numbers only include 24 diseases [actually, 27] for which good epidemiology studies were available, researchers have identified 80-100 different autoimmune diseases and suspect at least 40 additional diseases of having an autoimmune basis.” The AARDA list is much more comprehensive than NIH (6, AARDA).

Most experts worldwide do agree that there are more like 80-100 autoimmune conditions: 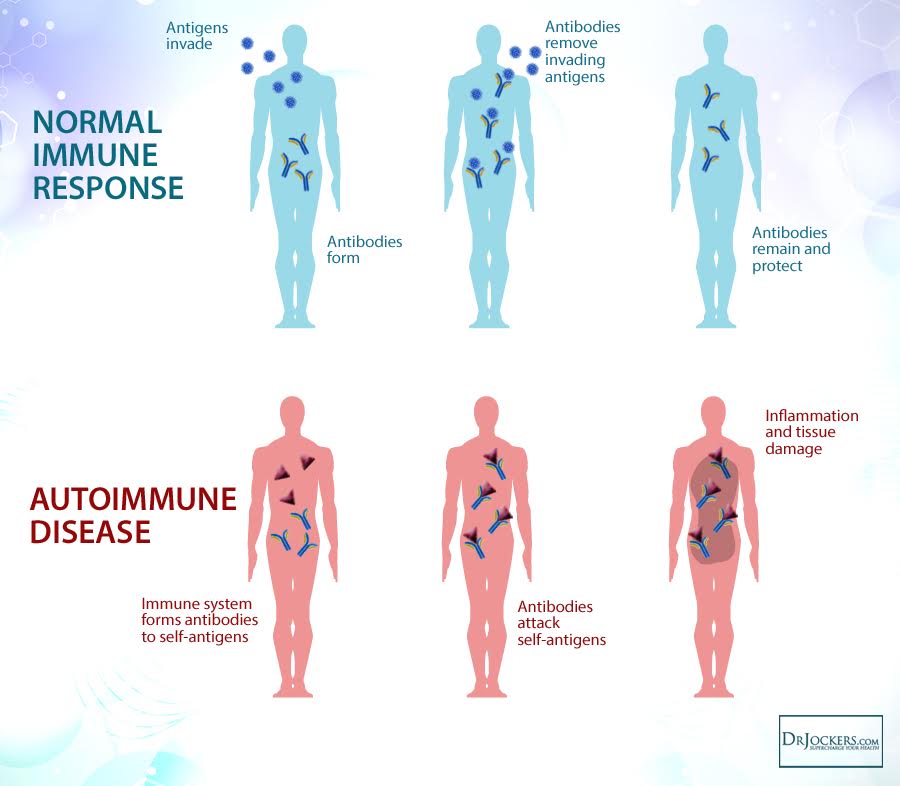 So, what is it? What’s happening in the immune system?

A few basics about the immune system

Here are a few basic operators in the function of our immune system – what they are, and what they’re supposed to do:

T-cells and B-cells are meant to recognize the difference between invading “non-self” cells, or antigens, and our own “self” cells by the shape of specific foreign antigen molecules. The immune system is meant to attack only substances and infections that are thought of as foreign invaders or non-self cells. Sometimes, however, the immune system gets confused by what is and what isn’t self and attacks healthy body cells, causing inflammation and tissue damage. That’s an autoimmune response, where “auto” refers to the attack of “self.”

A simple overview of what’s meant to be happening vs. what is, in a patient with autoimmune disorder (8, Jockers).

My favorite discussion tutorial about what is autoimmunity and a deeper dive into the analysis of it is by Dr. Sarah Ballantyne, popularly known as The Paleo Mom, whose writing delves into the science in a way that laypeople can understand. She has a great deal of information online, which largely delves into the Autoimmune Protocol and the Paleo way of eating. But her book, The Paleo Approach, provides a great deal of insight into the illness if you’re questioning why or whether a certain aspect of a driver is what it is, for example, or would just like more information without having to launch your own scientific inquiry.

Joy Cutrone, Wellness & Certified AIP Coach and Functional Medicine Certified Health Coach Candidate, is the founder of The Autoimmune Families Community. She leverages decades of experience as a client-centric, research-driven business professional with a rare persistence and attention to detail together with coaching skills to uncover, pursue, and coach a healing-based approach to autoimmune disease. Functional medicine was not known to her in our early journey, and she now makes it her mission to help speed the path of inquiry for people who want to find the root causes of chronic illness and improve overall quality of life.